Envelope points can be tagged as loop- or sustain-points by selecting a single vertex and clicking the corresponding sustain/loop buttons on in the controls area.

To set a loop start point, select a vertex that's at least two behind the sustain point and hit the loop icon ( 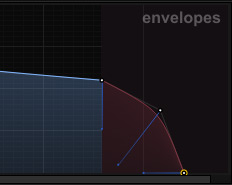 Because these are multistage envelopes, there's no direct correspondence with the ASDR paradigm. But there are two regions: the main region and a release region, separated by the sustain point.

When you make either Red or Blue the primary viewing axis (by clicking the appropriate x-axis button), then the 3D envelope editor replaces the 2D editor.

This editor visualizes the envelope as it varies along the chosen x-axis range, with time always as the y-axis.

The horizontal lines are the paths the nodes of the envelope follow along the range you selected.

In this editor you may adjust the position of the ends of the node path and chop the path into segments with the Axe tool.